As illustrated in the chart below, competition is an economic reality. Out of 114 companies, only 14 were able to maintain Economic Margins > 10%.

Unlike traditional valuation approaches that utilize highly sensitive perpetuity assumptions, the Applied Finance approach incorporates the widely accepted economic reality of competition by estimating a company specific Economic Profit Horizon®. This essentially eliminates the excess spread a firm generates above or below its cost of capital. 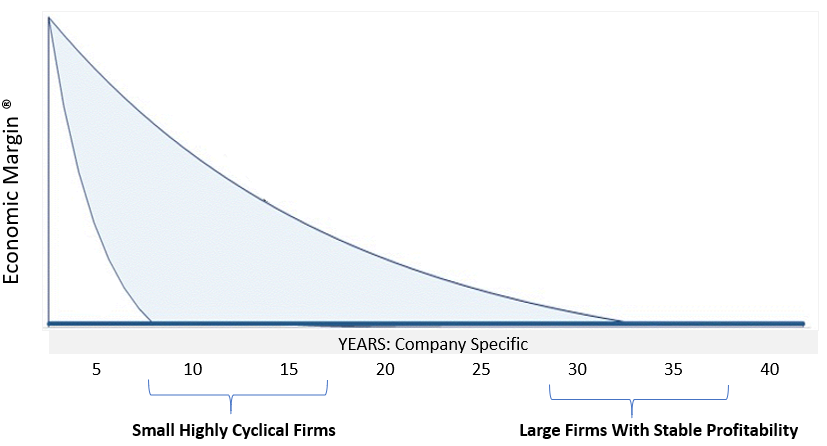 Our research provides evidence of four factors that tend to explain the length of time that the market will pay for companies to generate returns above/below its cost of capital. For example, our research suggests that companies with high excess returns are likely to attract competition in the marketplace, requiring a shorter Economic Profit Horizon® in the company’s valuation. Subtle insights such as these are just not achievable with traditional DCF approaches that rely on terminal values and perpetuities.

For example, let’s take a stock like Micron using a perpetuity assumption.  In 2015 – Micron Share price dropped from $35 to $14, slight changes in the terminal growth or the discount rate had major ramifications on the estimates of intrinsic value.   How can anyone be confident in their intrinsic value estimate when it’s more volatile than the stock price? 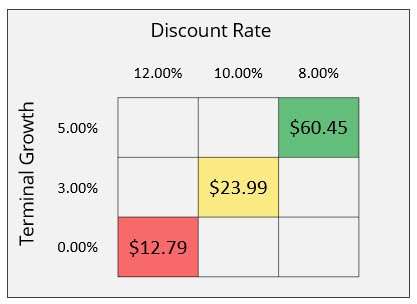 On the other hand, our Economic Profit Horizon® is an objective and company specific estimate of how long you should be willing to pay for a company to earn a spread above or below their cost of capital.  Once an economic margin goes to zero, we can then discount those cashflows to calculate an intrinsic value.

Our proprietary  Economic Profit Horizon™  enables us to model in competition in an objective and repeatable manner that enhances our estimates of intrinsic value.