When might inflation be a problem for bond and stock investors?

Prices around the world are going higher. Some amount of inflation, that associated with a growing demand for goods and services, is desired by central banks and policymakers. History tells us that high inflation regimes are undesirable, and hyperinflation is toxic. 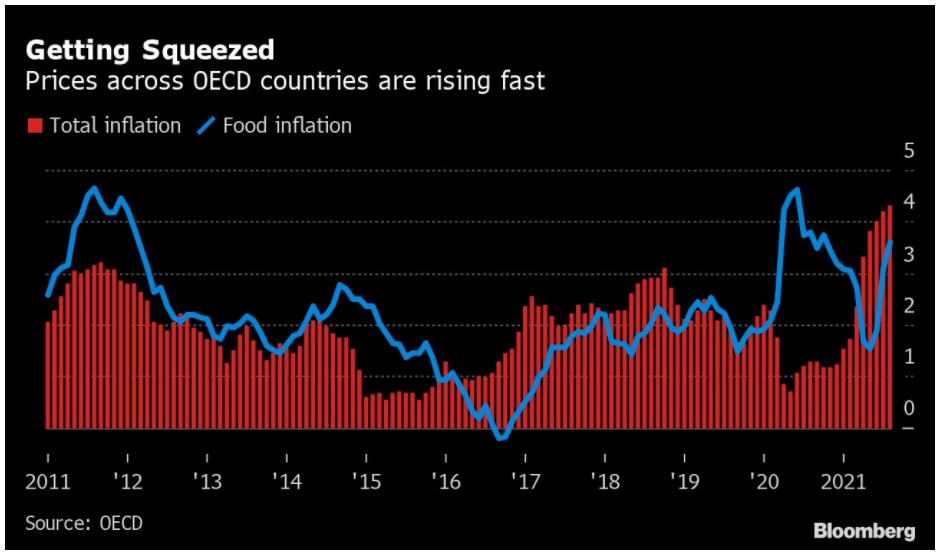 Reported measures of price inflation on items typically familiar to consumers can appear alarming. Those with long memories might recollect the persistent and high inflation of the 1970’s, only brought to an end with the policies implemented by Federal Reserve Chairman Paul Volker. Subsequent central bank presidents have studiously tried to avoid a repeat performance of the high inflation era. During this time which became known as the era of stagflation, inflation figures were added to the unemployment rate to obtain a measure referred to as the “misery” index, which peaked at well over 20.

The Federal Reserve has dual mandates from Congress – maintain price stability and maximum sustainable employment, and reports to Congress annually in what is known as the Humphrey Hawkins testimony.

The Producer Price Index (PPI) captures the big swings we see in commodities that are much more volatile than prices for consumer/retail goods and services seen in the Consumer Price Index (CPI). Figures for both series are published monthly, with complex seasonal adjustments and a final decimal figure whose rounding error is often significant. Traders focus on the monthly number versus expectations, policymakers watch the long-term trend.

CPI is out today. Note the PPI captures the big swings we see in commodities that are much more volatile than for consumer/retail goods and services. I still think it’s going to be high. pic.twitter.com/XGONykbewi

The Core CPI excludes volatile food and energy components. Though widely derided, it does converge over time with the broader measure. An interesting bit of history for students of the market: the use of the “core” CPI was implemented by respected Fed Chairman Arthur Burns at the behest of Richard Nixon in the early 1970’s as his administration struggled to contain inflation. A bonus piece of history worthy of note; when the Great Inflation took root in the 1960’s and the prices of eggs, along with many other items rose, Lyndon Johnson ordered the Surgeon General to issue alerts on the hazards of the cholesterol in eggs.

Very similar to the CPI, the Personal Consumption Expenditures (PCE) has been the Federal Reserve’s preferred metric since 2012. [not shown]

Implied inflation rates can be obtained from Treasury rates minus the rate on TIPS (Treasury Inflation-Protected Securities). Buyers “need” inflation to be higher than the breakeven rate to outperform those who own traditional fixed coupon Treasury notes and bonds. These “breakeven” inflation rates are of keen interest to policy makers. Former Treasury Secretary Larry Summers recent comments:

The TIPS market is suggesting inflation in 3 percent range over 5 years and more next year. Breakeven inflation over 5 years is up 40 bps in the last month. Expectations data are even more disturbing.

Until recent years, economists did not believe the “real” rate on Treasury securities could be negative. Amazingly, today the TIPS rates are negative for almost all maturities. Ten-year TIPS have been negative in yield for over a year, and shorter maturity TIPS first went negative in yield in 2010.

In recent years, the Federal Reserve has struggled to get long term inflation expectations to move higher.

We have data on breakeven inflation rates (a market-implied measure of inflation expectations) going back to 2003.

Forward interest rates and the long-term inflation expectations they contain is the critical rate watched by Federal Reserve policymakers. The Federal Reserve will view itself as “failing” if it cannot help inducing sustained long-term inflation of 2%. Long-term rates also incorporate complex dynamics relating to foreign exchange markets and global growth rates that are influenced by demographics.

Direct and clear measurement of inflation expectations. Global markets (rates, foreign exchange, trades in goods and services) appear interconnected in a manner inhibiting the ability of any single area (China, the US, or the Eurozone) to singularly produce inflation.

OOPS! #Inflation expectations on both sides of the Atlantic are rising again, w/US 5y5y now 2.6%, highest since 2014. Eurozone 5y5y at 1.86%, highest since 2014 as well. Will put more pressure on Fed/ECB on being more specific about how much they are willing to overshoot 2% pic.twitter.com/0PF7Jj1ylh

The Treasury yield curve, particularly as measured between the 2 and 10-year rates does a good, though indirect job, of forecasting inflation and economic growth. The sharp flattening recently observed suggests long-term inflation expectations, for the moment, remain muted.