This is a follow up piece to a recent article focusing on large cap stocks. This commentary will instead look at small cap value/growth relative attractiveness, as well as compare large and small caps. The graphs below will again follow the Applied Finance methodology of using median Valuation levels that are normalized (relative to long-term averages) and with red and green 1.5 standard deviation lines to create a “zone of reasonableness”.

Historically, Valuation levels in the Russell 2000 have stayed within our normalized zone most of the time. A few exceptions have occurred though: first, during the late 90’s Tech Bubble, small cap stocks had multiple periods of looking extremely attractive. Investors during the late 90’s tended to shun smaller firms in favor of larger, more established names as well as dot com firms. The Russell 2000 looked undervalued both at the height of the bubble in 1999 as well as in 2003, after large cap stocks had fallen for three years straight. A second period of strong undervaluation occurred during the 2008 Financial Crisis. At the height of the panic, the Russell 2000 was a great investment opportunity.

In 2020, when stocks sold off due to the Covid-19 crisis, small caps again looked attractive. Following the substantial recovery through the late spring and summer, small caps now appear to be at normalized Valuation levels. 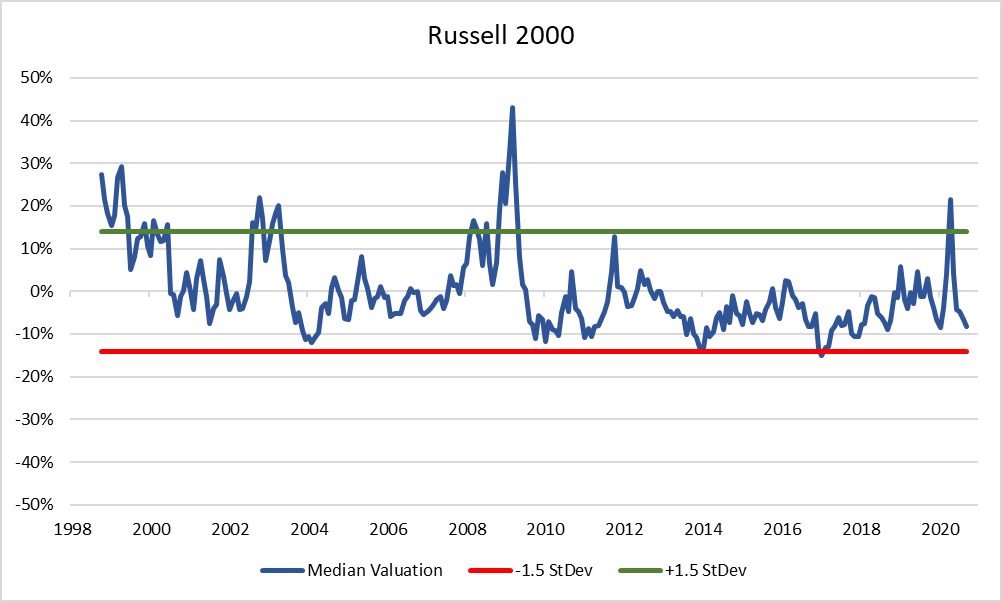 Breaking the index into partitions based on value and growth, we can see stark differences in the relative attractiveness. On the value side, we see that this subsection’s valuation level has historically tracked closely to the index overall. Brief periods of attractive Valuations existed in 1999, 2003, 2008 and 2020. The market today appears to be slightly more attractive than the long-term average. 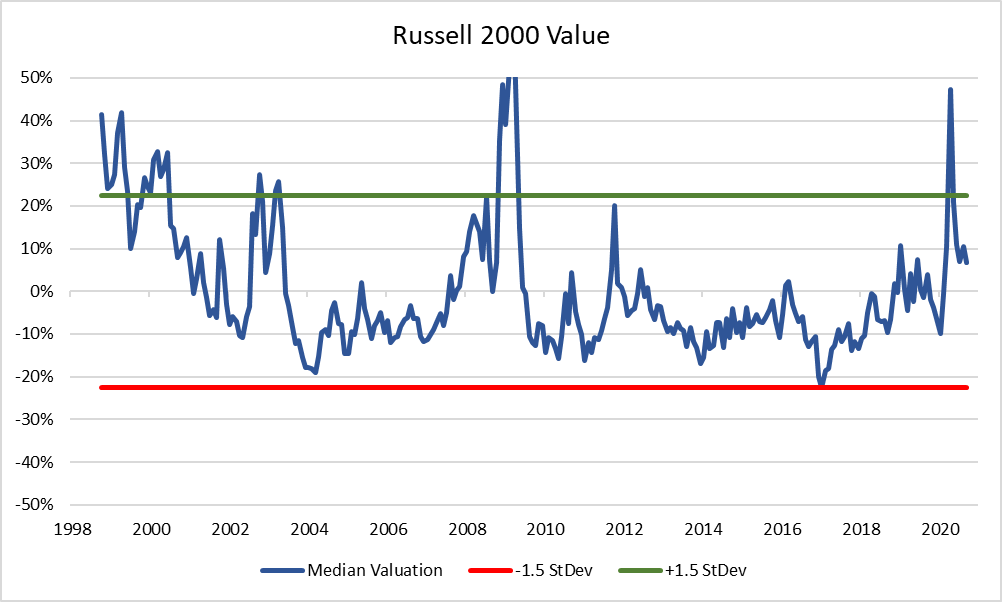 On the growth side however, we see dramatic differences. First, note that during the Tech Bubble, small cap growth stocks fluctuated greatly a few times: small growth looked attractive in 1999, expensive by mid-2000, and then attractive again in late 2002 into 2003.

Stocks then traded in our normalized zone until the 2008 Financial Crisis, when small growth again looked undervalued. Since the initial recovery of the ’08 crisis, we’ve seen small growth stocks become gradually more and more expensive.

The 2020 Covid-19 crisis has accelerated the longer-term trend. In particular, as smaller Tech and Health Care stocks have been bid up by investors betting on the work-from-home trend as well as the possibility of healthcare reform. These sectors have helped push smaller growth names to look quite expensive. In fact, the last period of significant overvaluation of smaller growth names occurred in late 2000, as the Tech Bubble was beginning to burst. 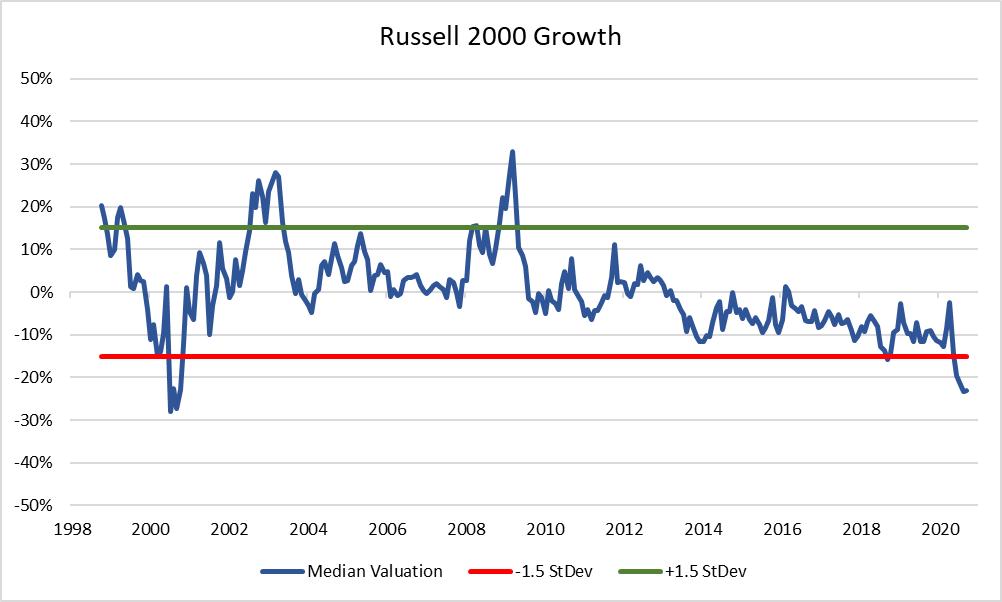 Comparing the relative attractiveness of value and growth partitions, we can view the relative valuations of value and growth stocks. Higher figures indicate that value is more appealing, lower figures show that growth is more appealing. The 2020 Covid-19 crisis has caused a spectacular shift in relative Valuations in the two categories. In fact, this is the largest spike in relative Valuation that we’ve seen since the Tech Bubble, with small value stocks appearing significantly more favorable than small growth stocks. 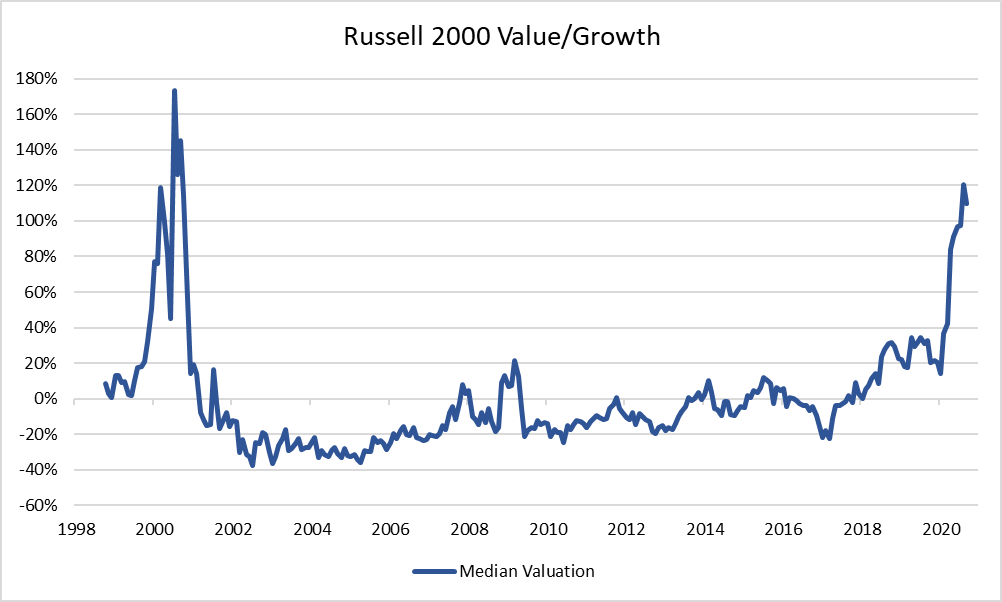 Comparing large caps to small caps, we find that small caps are marginally more attractive right now. Note that in both charts below, Valuation attractiveness has been pushed downward in the past few months. Much of this has been driven by growth stock performance, and we now find that growth stocks in both large and small caps seem expensive.

Investors are constantly shifting and searching for opportunities. Most of the time, stocks trade around reasonable levels given their capital and expected future cash flows. Sometimes however, significant events can push markets to excessive levels. Applied Finance has seen this multiple times in the past. Currently, we observe a few key characteristics. First, small cap stocks look more attractive than large caps by a marginal amount. Large caps have just barely crossed under our warning line, while small caps are still in our zone of reasonableness. Second, in both large and small caps, value stocks look more attractive than growth stocks. Additionally, growth stocks in both the large and small arenas look expensive on an absolute basis. Finally, small cap value stocks appear to be the most attractive investment opportunity at the moment. Applied Finance will update these charts on a periodic basis and follow up with any new developments. 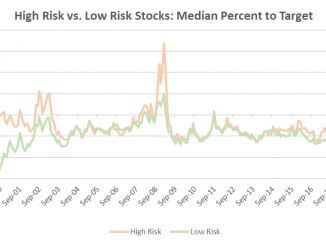 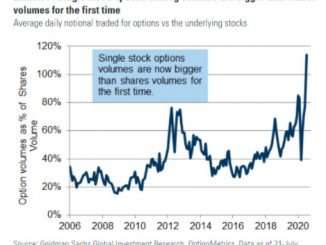 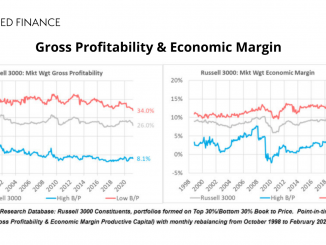