Index investing started with John Bogle in 1975. Today Bogle’s Vanguard manages over $4.9 trillion predominantly in various passive products. It is ironic that a man famous for not market timing an investment portfolio, perfectly timed the launch of passive investing to coincide with an intellectual explosion in financial economics that passionately supported his pioneering passive investing products. Today the irony continues, as the intellectual foundations in financial economics that underpinned Bogle’s incredible success are much less robust than they appeared in the early 70’s, yet the push for passive investing is stronger and more fervent than ever. For proactive, process-oriented, intelligent advisors this will create a great opportunity to distinguish yourself from the growing herd of “commodity” advisors who preach little more than fee minimization, rather than alpha generation or negative alpha avoidance. The bargain such advisors believe they reach with their clients is by investing in index products, clients will get a low cost and fair return, avoiding the unpleasant advisor/client conflicts arising when active strategies underperform passive strategies.

This bargain rests on what has become an accepted “truth” that beating the market is typically the result of luck, therefore, investors should not pay higher fees to investment managers that are just lucky. The corollary to this “truth” is that broad indices provide a “fair” return. But what if passive strategies do not provide a fair return? After all, at the end of the day indexes are nothing more than managed portfolios. Let us explore how skillful the committees or rules responsible are for two of the most popular passive index products, The S&P 500 and The Russell 1000 Value Index and compare those results to Applied Finances broader mandate strategies, The Valuation 50™ and The Valuation Delta™.

The Rise of the Index

Before evaluating whether a “fair and square” deal results from passive index investing, let us first review the intellectual foundation for passive investing. Two theories from finance, when combined, created the wonderful primordial stew from which passive investing evolved into the single most dominant application of financial theory.

Both developments were extraordinary achievements on behalf of increasing financial knowledge. William Sharpe won the Nobel Prize for his development of the CAPM, and Eugene Fama won a Nobel Prize for his work on market efficiency. The work in both these areas exploded in the mid 1960’s and early 1970’s and the combination of the two ideas resulted in the following prescription for portfolio construction:

Since markets are efficient and incorporate all known information into prices efficiently (and fund managers tend to underperform the overall market, as documented by Michael Jensen), and under the CAPM every investor only needs to own the market portfolio with varying degrees of leverage – shouldn’t everyone just own an index fund that represents the market and save the cost of active management fees and random performance from active managers?

The rest as they say is history. Passive investing has taken on a religious fervor among many advisors, to the point they will not consider an active alternative within their practice, focusing only on fee minimization as the key to success. Such dogmatic beliefs will not age well, as a source of advice for clients and from a business perspective for the advisors themselves. Interestingly while Vanguard is the poster child of passive investing, they have over $1 trillion invested in active strategies.

John Bogle had impeccable timing, as after he started passive investing, many cracks began to appear in both the Capital Asset Pricing Model and the Efficient Market Hypothesis. Without going into detail on the various criticisms of each, we will just list some of the easiest to communicate. Regarding the CAPM, its central tenant that a security price return should relate to market prices as a function of its individual variance and covariance with the market is simply false. Returns predicted by the model have little resemblance to actual returns.

Much like the Gordon Growth Model is a mathematically elegant but unrealistic valuation approach, so is the CAPM a mathematically elegant but unrealistic asset pricing model. Unlike the CAPM which makes very testable predictions – stock A is more risky than stock B and thus should have higher future returns, the Efficient Market Hypothesis is a logical construct that is quite difficult to disprove once it’s accepted as any test of market efficiency is a joint test of an underlying asset pricing model AND a test of market efficiency. Thus, when tests show a market inefficiency, the actual problem may be a poorly specified asset pricing model and not an inefficient market. Nonetheless, evidence continues to mount that while markets reflect new information into stock prices, markets also tend to over and under react to information, and in aggregate, tend to exhibit many systematic biases rooted in similar traits that individuals exhibit. The discovery of such biases has resulted in several Nobel Prizes as well. Robert Schiller, Richard Thaler, Daniel Kahneman all earned Nobel Prizes for their work identifying how markets do not act as predicted by the EMH.

Interestingly, the science that birthed passive investing is much less settled today than in 1975. Naturally, this raises the question of whether investors have received a “fair bargain” through passive investing. To answer that question, we will take the monthly returns of the S&P 500 and the Russell 1000 Value indices and risk adjust them via the Fama French 5-factor model (FF Model). We will look at the period of June 2004 through June 2020, to coincide with the launch of the Valuation 50®. The FF Model reflects the monthly returns from 5 factors that empirically have explained the returns to stock portfolios.

The factors are related to:

Taken together, these returns filter out the base level return a portfolio strategy should earn, without accepting more risk. For example, if a portfolio strategy focuses solely on small firms, it should at least earn the return to the FF Model factor for small firms, otherwise the strategy is destroying investor wealth by underperforming. After risk adjusting for the effects of such factors, how do the S&P 500 and Russell 1000 Value indices perform?

If one looks at the absolute returns to these indices against the category of all mutual funds to which they belong, it is easy to understand the allure to going passive. For example, as of July 2, 2020 the SPY ETF, which is a proxy for the S&P 500 index, beat approximately 79% of all Large Cap mutual funds over the past 15 years in the Blend category according to Morningstar. Less impressive, the IWD ETF, which is a proxy for the Russell 1000 Value Index, only managed to beat 46% of all Large Cap Value mutual funds over the past 15 years according to Morningstar. However, raw returns do not tell the whole story as each index may either be taking on too much risk relative to companies it selects compared to a known alternative available from the FF Model. 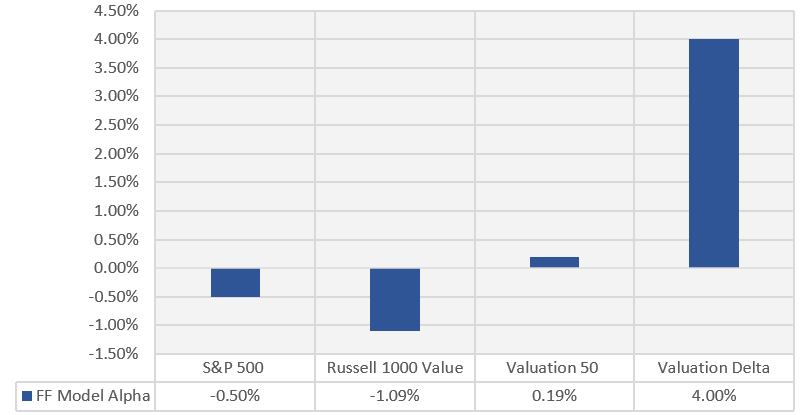 Further when comparing the S&P 500 against either Applied Finance portfolio, we can say with 99% confidence that the estimated risk adjusted alpha of the S&P 500 is below the estimated alpha of Applied Finance portfolios. These are measured results over 15 plus year time horizons, and encompass various market regimes, bubbles, and crashes. Both indexes exhibit inferior return characteristics after controlling for the factors that explain their returns. Alternatively, by focusing on the ignored, but common-sense concept that stocks trading below their intrinsic value offer superior long-term rates of return, Applied Finance strategies offer superior return characteristics to broad passive alternatives. Advisors that strictly focus on fees and ignore the ability of some managers to consistently outperform by having a unique insight others do not, will eventually find their clients gravitating to either lower cost advisors or advisors that truly add value by finding skillful asset managers.

The current zealous defense of passive investing will eventually require re-examination. In its place will likely be a more balanced discussion of combining active and passive investing for some portfolios as skillful managers are identified. Smart advisors will frame part of their value add to clients as due diligence experts, able to find asset managers with sustainable repeatable strategies that over full market cycles demonstrate an ability to create positive alpha, after accounting for the strategy’s risk. Further its imperative advisors hold accountable asset managers to prevent them overselling their strategies to increase revenues at the expense of diluting their alpha creation effectiveness. While convenient for messaging, it is silly to assume all investment managers have equal skill. Michael Jordan exists. Assuming all investment managers have equal skill is equivalent to assuming Michael Jordan is just another basketball player.

Insightful advisors will work from such a framework to best serve the long-term interests of their clients. When evaluated against all Large Cap strategies in the Zephyr universe since its inception in 2004, Applied Finance’s Valuation 50 strategy is among the top 5% of all large cap strategies. Similarly, Applied Finance’s Valuation Delta® strategy is in the top 1% against all large cap strategies since 1998. More importantly, both strategies follow a disciplined process designed to overcome many of the biases Behavioral Economics predicts lead to investment manager failure. This combined with our proprietary valuation research gives us what we believe is a sustainable, repeatable edge to continue our superior performance. 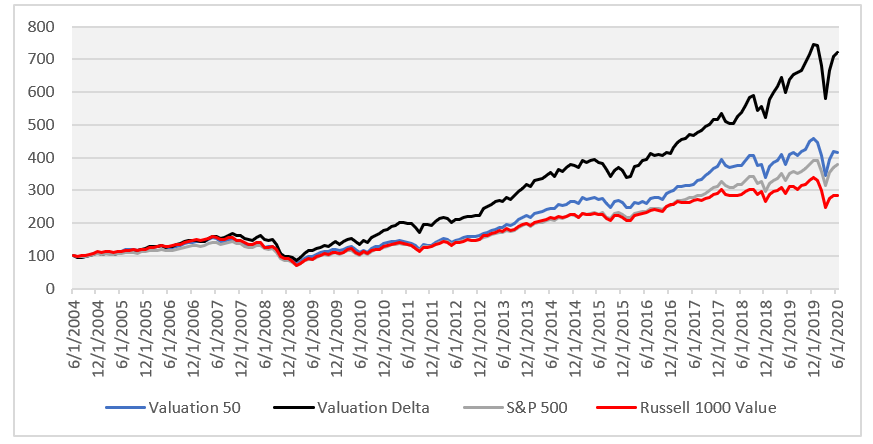 Applied Finance, a thought leader in valuation and portfolio construction, is a true “value” investment management company.  Unlike the majority of firms today that focus on low multiples to define “value”, we define value as identifying companies trading below their intrinsic value.  Our Valuation Driven™ approach forms the foundation of our investment decisions…more