Over the past 25 years, Applied Finance has studied market patterns and trends using millions of Valuations. The firm’s live database goes back to 1998, with further data starting from the early 1990’s. The two most infamous events in this dataset are the late 1990’s Technology Bubble and the 2008 Financial Crisis. Applied Finance has dissected this data time and again to learn more about how markets tend to behave in both dramatic falls and eventual recoveries.

There are stark similarities in factor performance between the Tech Bubble and the Financial Crisis. Although we’ve known this for years, it’s been difficult to draw strong conclusions in the past. The two crises were dramatically different in nature (irrational exuberance vs banking crisis), relatively close together and received separate regulatory responses. Given only those two events, it’s difficult to draw conclusions on causation vs correlation.

Throughout the Covid-19 Crisis, we’ve kept a close eye on factor behavior both in the initial fall and during the rapid, semi-recovery we’ve seen so far. Factor performance of Valuation, Momentum, Value/Growth and Size has echoed the results of both the Tech Bubble and ’08 Crisis.

In particular, Valuation has nearly mirrored what occurred in the past two recessions. The attached chart shows the S&P 500 and Valuation A’s in separate periods. The green lines represent the current Covid-19 crisis, while the blue lines represent the blended monthly performance of the S&P 500 during the Tech Bubble and ’08 relative to the worst low point (for example, the Trough Month for the S&P 500 in the blend is 50% of the performance in September of 2002, with 50% of the performance in February of 2009; the low points for the market during each crisis). Valuation blend is calculated in the same manner. Starting from the low point, we use 6 months of data prior blended at a 50%/50% rate, and 18 months of data after again at a 50%/50% rate to show the effects over time. The same was done with Valuation. 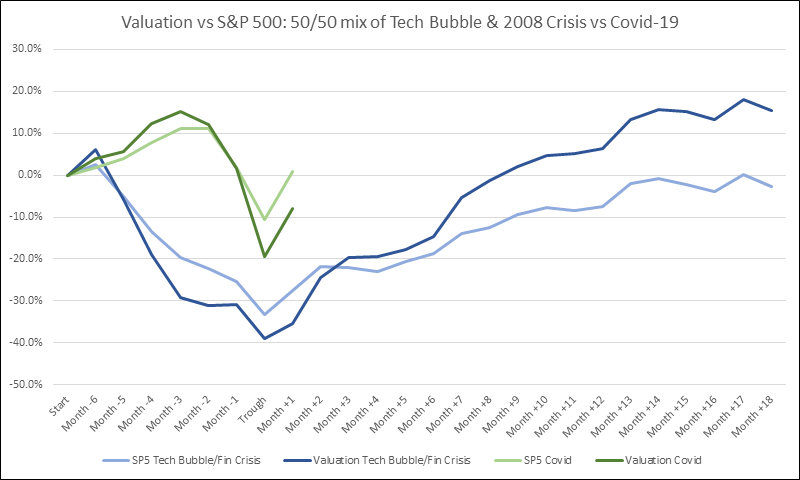 The results are clear, and we can draw three conclusions:

Given the current environment and factor similarities to the Tech Bubble and ‘08, we believe that there is a better than normal likelihood that the Valuation factor outperforms over the upcoming 12-18month window.