Intel is the only leading semiconductor company that can manufacture the chip it designs. The company has fallen short of its release schedule over the past couple years, but the company still is biggest provider of CPU’s with only 1 other CPU competitor currently.

The company sold over $77 Billion in products and services in FY2020, generating over $35B in operating GAAP cash flow. INTC management expects flat revenue growth for FY2021. Excluding it’s divested NAND business, INTC expects revenues to be $73.5 Billion (a 1% increase over similar FY2020), generating operating cash flow of $31B and US$11 Billion in Free Cash Flow. Its divested NAND business is still on its statements until it closes later this year at which point it will receive $7B in cash from SK Hynix.

Broad portfolio with good secular growth ahead
Intel not only provides CPUs for computers and servers, but it also provides GPUs, accelerators, FPGAs.

INTC owns one of the leaders in advanced driving assistance systems (ADAS) and autonomous driving, Mobileye. Mobileye was selected by Toyota to help develop its ADAS and currently working with over 25 OEMs. It was the first company to receive permission to test its autonomous driving product in New York City. Autonomous driving is still early and should see much faster growth in the next several years as the technology proliferates.

The company has ramped its investment in GPU as it brough over AMD’s Raja Koduri in 2017 and is creating oneAPI software development toolkit which enables developers to build cross-architecture applications (CPU, GPU, FPGA, etc). The new toolkit will help INTC enter the discrete GPU space with better positioning as developers are less locked into Nvidia’s software stack.

As can be seen in the graphic, the company has the products targeting the future higher growth areas – Autonomous driving, 5G, AI/Analytics.

Focused on Regaining its Edge
The company has realized their shortfall and decided to bring in Pat Gelsinger as the new CEO with the sole focus on ensuring Intel regains its leadership position. Pat was at Intel for 30 years prior helping in designing the Intel Core & Intel Xeon processor and was Intel’s first Chief Technology Officer. After leaving Intel to join EMC in 2009, he eventually became the CEO of it’s VMware unit in 2012 that he made into global leader “in cloud infrastructure, enterprise mobility and cyber security – almost tripling the company’s annual revenues.”

From all his talks and actions since he became CEO of Intel on February 15, 2021 – he has been all about moving Intel forward to regain its process leadership.

1. Although Intel has had issues with its process node manufacturing recently, the company has regrouped with its new CEO and has committed to reach parity to TSMC by 2024 and become leader in 2025. It’s an aggressive plan given Intel’s recent track record but the new CEO was brought in specifically to bring Intel back into the lead. They have brought back many leaders to help Intel get back on track in the manufacturing process.

2. To ensure future cadence schedule stays on track, Intel has been working on breaking the link between chip design and manufacturing. They’re designing their chips so that any individual part (chiplets) can be manufactured by 3rd parties after which Intel can use its advanced packaging technology to bring together the different parts to ensure it meets their product specifications. This lowers the risk of any one process technology slowing Intel’s annual cadence leading to better client relationship.

3. The new IDM 2.0 strategy with it starting to provide Intel Foundry Services to outside chip designers such as Amazon & Qualcomm will we believe also benefit shareholders in the longer run as it will unlock the value that is in their fabrication plants. In a way, they are following Amazon’s model to make a cost center to a revenue center. Currently with TSMC & Samsung the only available foundry providers for leading edge logic chips (GlobalFoundries is available but they are currently a few generations behind), the industry as a whole needs a viable 3rd leading edge foundry to meet the demand and also de-risk the supply chain issues that have become more apparent in the post-Covid era.

In terms of profitability given the capital investment required – if you look at TSMC, a pure play chip foundry services – their Economic Margins on a default basis – are fairly similar historically then Intel outpacing TSMC from 2017-2020 as it benefitted from higher margin sales for its data center group whereas TSMC invested much more in its fabrication plants. The investment has started to pay off for TSMC as its margins have come back to historical levels.

In the current geo-political backdrop, Intel also benefits as US & potentially European governments help to partially fund the newest plants to move away from the Asia concentrated semi supply chain. If Intel management strategy is executed successfully, the company should regain their edge.

Valuation
We believe the company’s current stock price has discounted the risks more than necessary.

As we discussed earlier, while the company does have challenges in the near-term, INTC has started to address the issues and does have a strong secular tailwind as more compute chips will be needed for the foreseeable future.

The company trades at valuation level that is well below its peers. 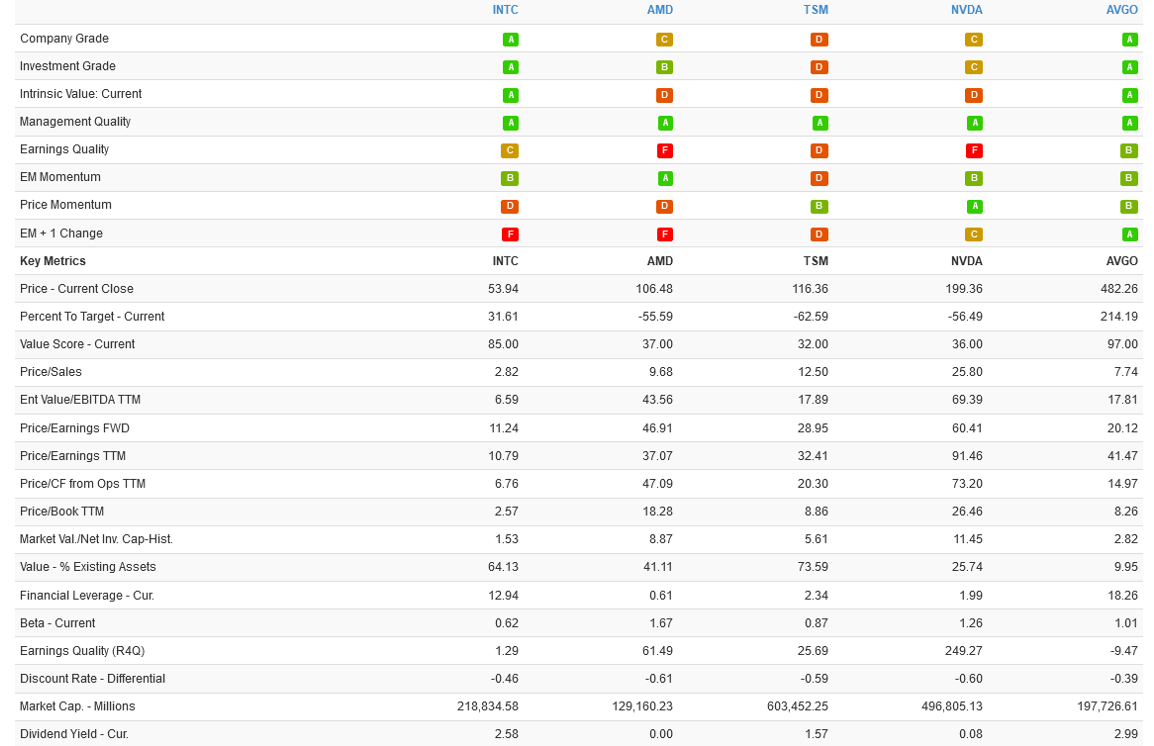 On a ratio basis, Intel is either undervalued by approximately 3x or its peers are overvalued. The current expectations built into its peers is much higher than Intel so we believe the upside is much more in INTC vs its peers if management executes to its plan.

Our target model shows 26% upside currently with a target price of $68.22. Our model assumes, that sales are flat his year (FY2021) with it increasing 1% in FY2022 and then 5% annually for the next 3 years with margins at 45%. The assumption for FY2022 is that new Alder Lake chips for client computing in late 2021 and its new data center chip Sapphire Rapids in first quarter of 2022 will help spur growth to offset the loss of revenues from its divested NAND business. For FY2023 forward, the assumption is its new EUV based chips and faster growth at Mobileye and new GPU will help provide additional growth.

If we look at the matrix, there is a margin built into our current valuation. The company’s margin would have to be 2% lower and sales growth 4% lower than our forecast to see a downside in intrinsic value.

Conclusion
We believe Intel is a good risk/reward play given its potential growth and low expectations. Intel provides good exposure to the semiconductor market at a reasonable price. Although the stock has had tough year for FY2021, we believe long-term investors will benefit as new management accelerates its development timeline and builds a potentially new business segment with IFS. Unfortunately, as the new plants take several years to bring into fruition, there will be sometime before it impacts the bottom line. However, we should be able to see how well the new management hits its key execution targets with the upcoming release of Alder Lake /Sapphire Rapids and then onto the road map released in July 2021. In addition to the share price upside potential, INTC also currently yields 2.57% ($1.39 annual dividend per share currently).

Disclaimer: This company is held in one or more of Applied Finance’s Large-Cap offerings.