100 mph pitchers are a rare and treasured commodity, simply because they have been among baseballs’ most effective players. The mention of Randy Johnson, Nolan Ryan, JR Richardson, Bob Feller, all elicit reverence for their amazing careers. Yet what of Steve Dalkowski who Ted Williams once faced off against and said – I could not see the ball, only hear it after it hit the catcher’s mitt? Relative to the greats, his fastball was arguably the fastest. Yet his career was mostly a curious footnote in baseball history – he will forever be known as the guy with a 125-mph fastball. Faster in the context of a pitcher is obviously not better if the pitcher cannot throw strikes. If at the end of the day a pitcher cannot throw strikes, a 125-mph fastball is irrelevant. There is a clear parallel to constructing portfolios, namely buying cheap stocks or as often referred to by quants – low price to something stocks. Just because a stock trades at a low multiple does not mean it trades below its intrinsic value.

Much like the baseball scout that goes crazy over rumors of a blazing fastball, the investing world over the past 25 years has gone bananas about buying cheapness, low price to something stocks, which are incorrectly labeled as value stocks. Today over $1 Trillion is invested in strategies chasing cheapness with armies of Finance PhDs searching for that magic variable that generates a back test that outperforms, regardless of the underlying economic foundation of a model. Witness the craze over the “profitability factor” during the past few years. Metaphorically, those PhD researchers are similar to the baseball scout in a rumpled suit trudging the sugar cane fields in the Dominican looking for the next Nolan Ryan. Sadly, few Nolan Ryans exist, and data mining only ends badly as reality catches up to bad economics. Similar to Stevie D, if cheapness variables cannot throw strikes, the portfolio won’t outperform.

How do we asses if a strategy throws strikes or in other words is sustainable and repeatable? By examining dominance. All else equal, does one variable dominate another in creating alpha? Does one strategy consistently dominate another in terms of performance? For example, let’s consider Applied Finance’s Intrinsic Value against the most common price to something variables – P/E and P/B. Over the past 20 years, the overlap between the cheapest 20% of S&P500 stocks ranked by each metric is: 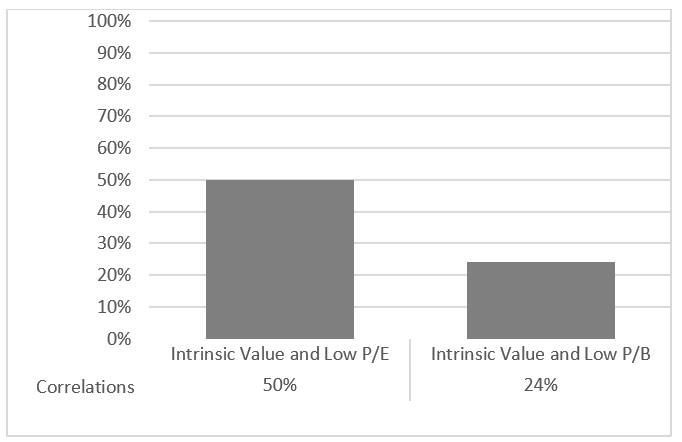 The graph below shows that is indeed the case. The greater exposure a portfolio has to stocks identified as undervalued by Applied Finance’s Intrinsic Value estimate, the better the expected performance for the portfolio. 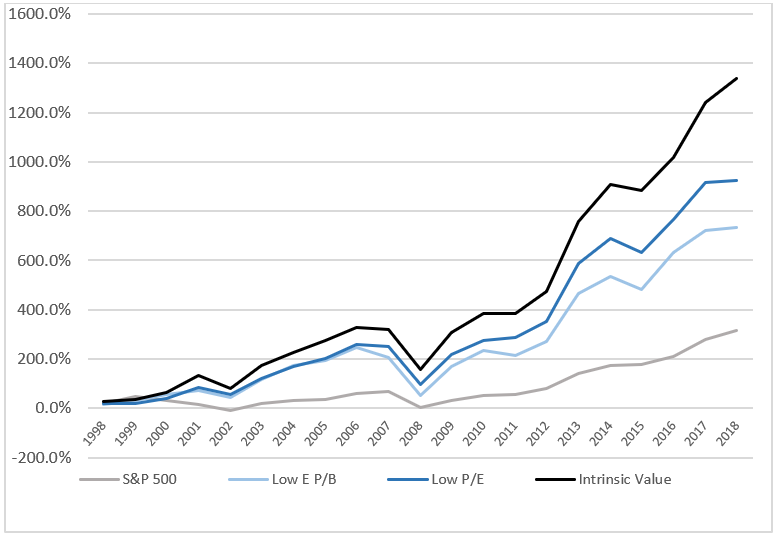 This is hardly surprising. Starting with the S&P500. The simplest criteria for joining the S&P500 is being big, and a company aiming for inclusion only needs to report positive earnings for its most recent quarter, in addition to an aggregate profit over the previous four quarters. A very low bar we argue. Because of the portfolio’s use in benchmarking, S&P500 has natural demand built into its constituents – regardless of how poorly run or overvalued those companies may be. Essentially this portfolio is constructed with a strong institutional passive cushion without any regard for valuation.

After reviewing the data, it is not difficult to understand that cheapness measures do work, but their true efficacy seems linked to their correlation to Intrinsic Value. Much like a 100-mph fastball being correlated to success, its success depends on the 100 mph AND strikes.  For low price to something variables to outperform, they require correlation to stocks being undervalued, but there is no guarantee those variables identify undervaluation.  Next quarter we will address this question directly, through an interesting test we constructed that is only possible as a result of the 20 million plus intrinsic valuation estimates we have performed over the past 24 years.