Looking Back and Forward Recap of 22Q2: During the 2nd quarter, US equity markets lost 17% of their value, with comparable declines between the Large and SMID market capitalizations. Underpinning the big declines are: 1) accelerating inflation, 2) lost confidence in the Fed’s ability to tame inflation, 3) growing fear that a US recession, or worse long-lasting stagflation is inevitable.

In early May when the Fed raised the Fed Fund rate by 50 bps, Chairman Powell stated the Fed was not actively considering raising rates by 75 bps. He instead indicated that additional half-point increases could be warranted at coming meetings. In early June, however, reported inflation data for May showed acceleration – Consumer price index rose 8.6% from a year ago vs. the 8.3% y-o-y growth in April. On a monthly basis, May headline CPI was up 1% while Core CPI rose 0.6%, compared with respective estimates of 0.7% and 0.5%. The Fed had to eat its words and raise the Fund target rate by 75 bps just a few days later after the May CPI data.

May CPI data dented hopes that inflation may have peaked and crushed investors’ confidence in the Fed’s ability to tame inflation. We are now in July and the June CPI and core CPI released last week showed growth of 9.1% and 5.9% respectively from a year ago, both exceeding expectations of 8.8% and 5.7%. It’s almost certain the Fed fund rate would have to rise to 3.5% by the end of 2022, and the Fed might need to consider raising rates by 100 bps at its meeting later in the month.

May CPI data dented hopes that inflation may have peaked and crushed investors’ confidence in the Fed’s ability to tame inflation.

With accelerating inflation and more aggressive actions from the Fed, a growing number of market participants are predicting the US will enter a recession. The 10 Yr US Treasury yield initially jumped to ~3.5% around the Fed’s June meeting but have since declined to ~2.96%. The 2/10-year US Treasury yield spread declined rapidly in June and became negative in July. That said, there is still a strong counter argument that this time it is different. Jobs are abundant and jobs growth has been strong, with unemployment in the US at a very low 3.6%. Wages are growing, up 5.1% within the 12-month period ending in June 2022, though below inflation. Very importantly, US consumers likely entered 2022 with savings of nearly $2.5 trillion, more than 10% of the US GDP, much of which were in savings and checking accounts. This is in sharp contrast to the average savings of just ~$350 billion in 2006/2007 before the 2008/2009 recession. Altogether, the belief is consumer spending, which accounts for nearly 70% of the US economy, will slow, but not collapse, as consumers have jobs with rising pay, and substantial savings. This belief is again fortified by June retail sales – retail sales increased 1% for the month, better than the estimate of a 0.9% rise, and compare favorably against the 0.1% decline in May. The retail sales growth of 1% is below the 1.3% inflation growth in June over May, however, which suggests consumers are pulling back, but not significantly, and are coping with higher costs without dramatically changing their behavior.

The belief is consumer spending, which accounts for nearly 70% of the US economy, will slow, but not collapse, as consumers have jobs with rising pay, and substantial savings.

The healthier conditions of US consumers are like a double-edged sword, on the one hand preventing consumption from pulling back tremendously while on the other hand helping inflation last longer. We hope the tug of war ends with the US economy on a soft landing.

State of the market: With the SP500 declining 20% in the first 6 months of the year, the forward 12- month P/E ratio for the S&P 500 declined to ~16 times, close to its 10 and 20-year average of 15.5 times. What is interesting is that the consensus 2022 EPS estimates for the SP500 have risen from $223.43 in December to $227.80 at the end of March and to $229.63 at the end of June, The EPS estimate increase in the 2nd quarter was mostly driven by higher earnings estimates for Energy and Materials, which more than offset estimate declines in Discretionary and Communication Services. The SP500 EPS estimate for 2023 has remained largely unchanged at around $250.

While P/E multiples provide a quick simplistic way of measuring market attractiveness, it doesn’t directly reflect changes to discount rates that are the result of higher interest rates and investor sentiments (Equity Risk Premium). We would like to provide a couple of scenarios to help frame alternative market value assessments as interest rate and sentiments towards corporate America change. We will use Applied Finance’s Intrinsic Value Database to address the following question for the US large cap universe with the R1000 as its proxy: How much should the R1000 decline, if the cost of capital increases by 10%? How much should the highest 50% duration companies’ value decline with such a change? How much should the lowest 50% duration companies’ value decline with such a change? How much should company values change if discount rates revert to 1980 levels? The table below lays out the answers to these questions. 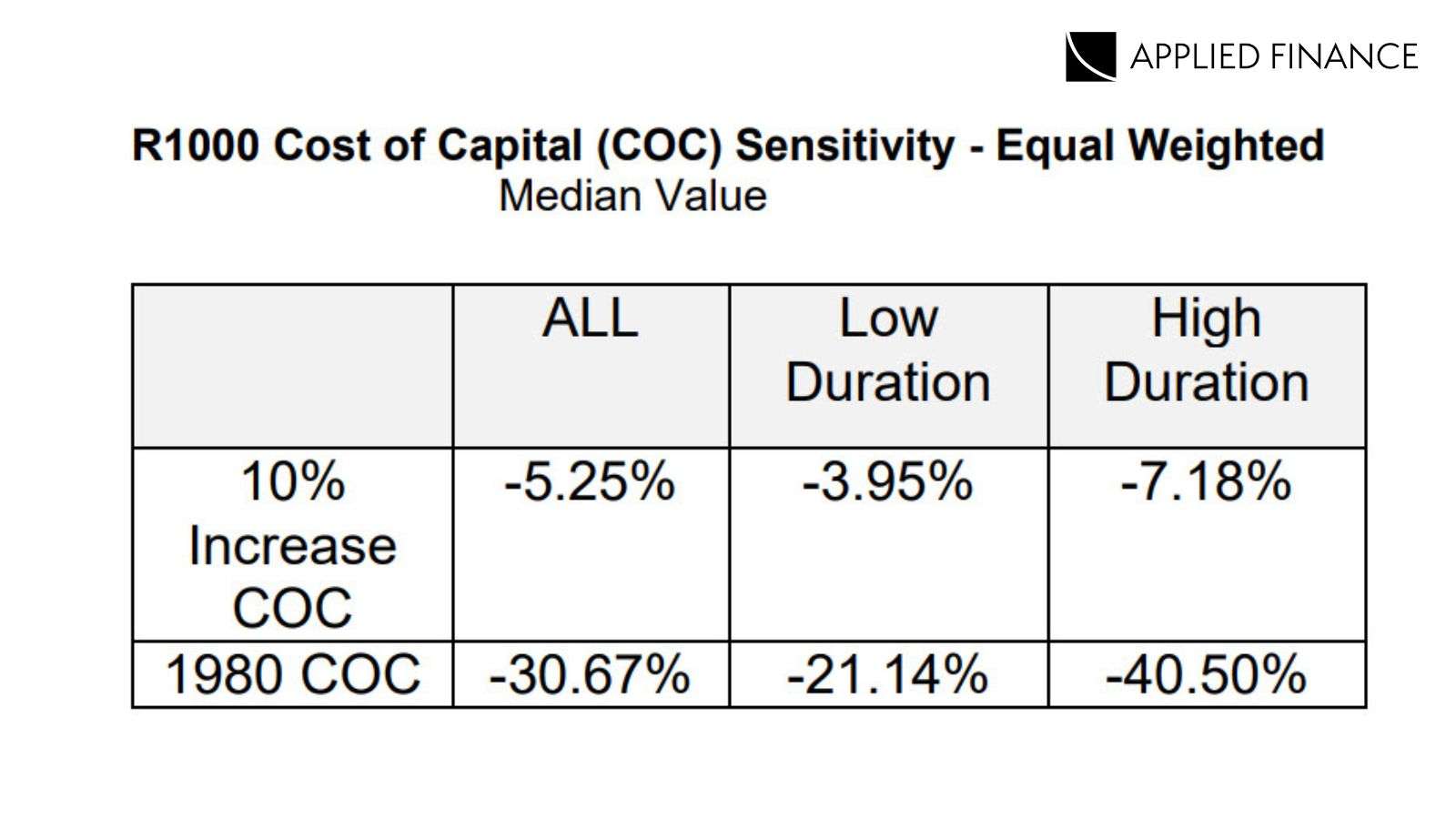 By the end of June, a 10% increase in COC would represent a 50-70 bps increase in COC, which could cause the median R1000 firm’s intrinsic value to decline by 5.2%. If cost of capital rises to the 1980 level, which would almost double an industrial firm’s current COC, and make a financial firm’s COC nearly 20% higher, intrinsic value for a median R1000 firm would decline by a dreadful 31%. In both scenarios, low duration stocks would suffer less of an IV reduction.

We are highly skeptical the COC would revert to the very high 1980 level, as we don’t believe the current economic and geo-political environment resembles that of the 70s/80s. Five year and 10- year breakeven inflation rates are currently at 2.6% and 2.3%, down from their peak in March/April by nearly 100 bps and 70 bps respectively. Interest rate hikes will dampen demand and supply chain issues will be resolved sooner or later. We still believe the structural factors such as technology advancement, and globalization even at a lesser extent than before, will keep long term inflation in check. Therefore, we think moderate downward adjustment of intrinsic value is more likely, as interest rates will continue to climb. It is hard to predict how market values might change, as they tend to be more volatile than intrinsic values. We believe, however, any big discrepancy between IV and price moves at individual stock level should present interesting opportunities.

We are highly skeptical the COC would revert to the very high 1980 level, as we don’t believe the current economic and geo-political environment resembles that of the 70s/80s.

The Value and Growth Debate: The Russell 1000 Value Index returned -12.2% in the first half of 2022, outperforming the Russell 1000 Growth Index by 871 bps. This performance is consistent with the market perception that “value” stocks are safer in the rising interest rate environment. When we examine the valuation attractiveness of “value” vs. “growth” from Applied Finance’s Intrinsic Value perspective, “value” remains more attractively priced despite the recent outperformance.

The chart below examines the Intrinsic Value Gap® between “growth” and “value” portfolios through time from October 1998 to June 2022. 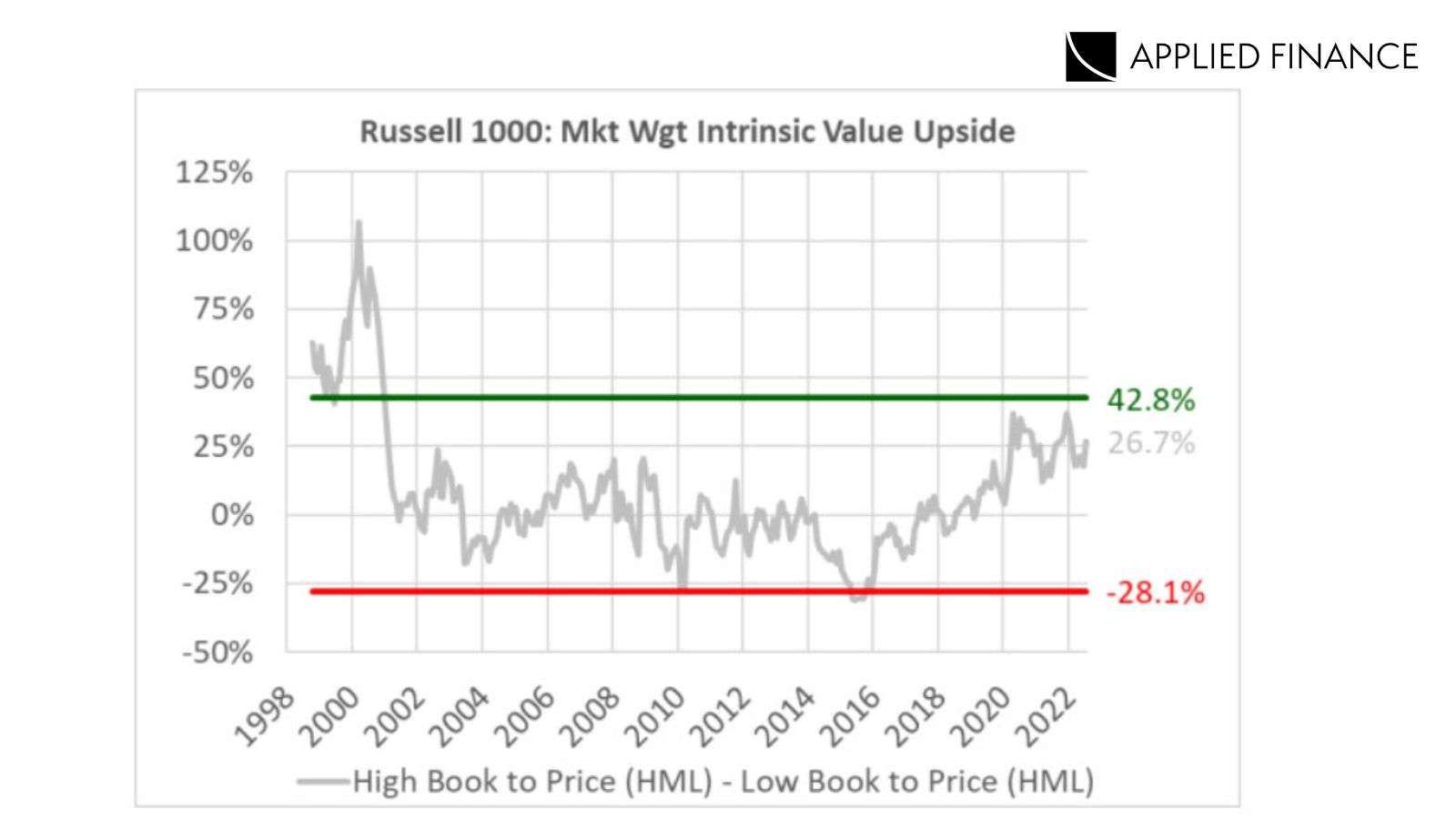 We note a few observations:

2. In 2000, the Intrinsic Value Gap® between “value” and “growth” stocks exceeded 100%, identifying the extraordinary opportunities “value” presented more than 20 years ago.

Therefore, we expect the outperformance of “value” over “growth” will continue, but we believe it is unrealistic to expect a generational rotation from growth to value like what we experienced in the early 2000s.

Valuation and Wealth Creation Are Timeless® 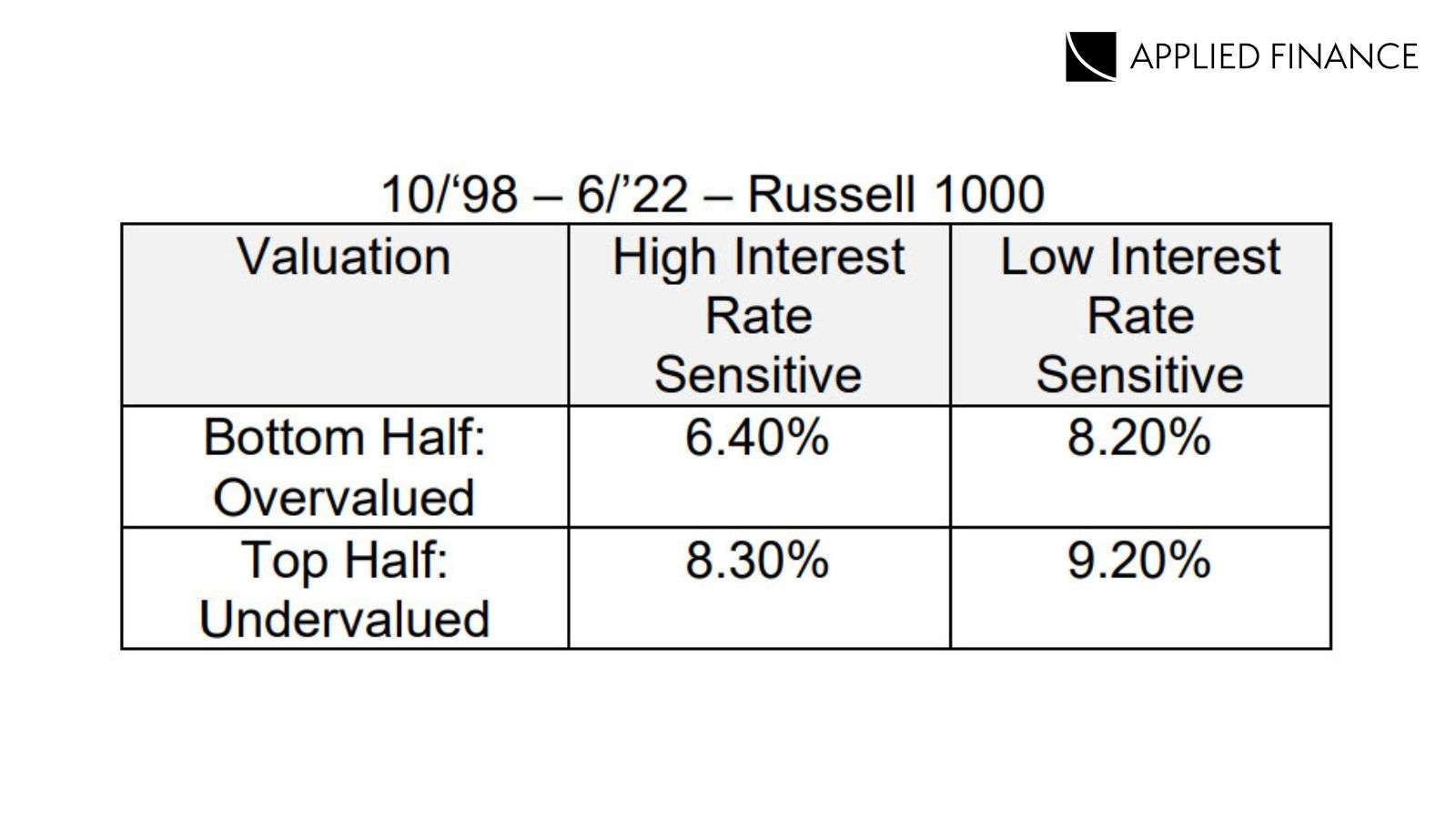 The Valuation50 will continue to focus on owning undervalued stocks in its SP500 universe, while maintaining broad sector exposure and industry diversification. Currently, the Valuation50 holdings are fairly divided between high and low duration names, when measured relative to the SP500 universe. We stress the importance of having a long-term investment horizon. Though we are carefully assessing our holdings’ latest operational results and management outlook, we are more keenly focused on the mid-long-term norm in 2024 and beyond in modeling proforma drivers of the companies we invest, when deriving intrinsic value estimates. We rely on a healthy valuation buffer to protect us, should our projection fall a bit short or the cost of capital increases from the current levels.