While we rarely make huge market calls and remain reluctant to do so at this point, its worth noting that growth stocks are trading at below -1.5 StdDev from historical normal levels signaling a significant move outside of normal range.  On the other hand, traditional value stocks that have been underperforming their growth counterparts, are showing relative valuation attractiveness.

Each week Applied Finance performs 20,000 valuations (over 20 million since 1995), calculating an intrinsic value for every company in an index. The Applied Finance Intrinsic Value factor™ takes into account each firm’s risk, competition adjusted future economic profitability and required investment to move far beyond relative static measures of “value” like P/E and P/B and steer clear of making unrealistic perpetuity assumptions that plague traditional DCF models.

Alongside significant price fluctuations in Q1 and Q2, it is possible that consensus estimates may be lagged given the extent of uncertainty in the shape and horizon of the recovery. Despite that uncertainty, it is noteworthy that median Applied Finance Intrinsic Value Factor™ levels for the Russell 1000 and Russell 2000 reflect levels at 1.5 standard deviations below normal.

Examining style categories, based on Applied Finance’s MVIC classification (which provides a more reliable style measure than book to price), significant valuation signal differences exist between value and growth stocks. Value stocks are trading at valuation levels aligned with long-term averages in both the Russell 1000 and Russell 2000, while growth stocks are trading at levels that highlight valuation characteristics more than -1.5 standard deviations below normal.

This is especially noteworthy, as the growth relationship in the Russell 1000 is now at levels last observed in the peak of the tech bubble. The Russell 2000 relationship exceeds any level observed over Applied Finances’s live research horizon. Growth, especially tech and health care, has been favored in this season of sheltering in place, but it appears that forward-looking valuation prospects may be limited at current market prices. 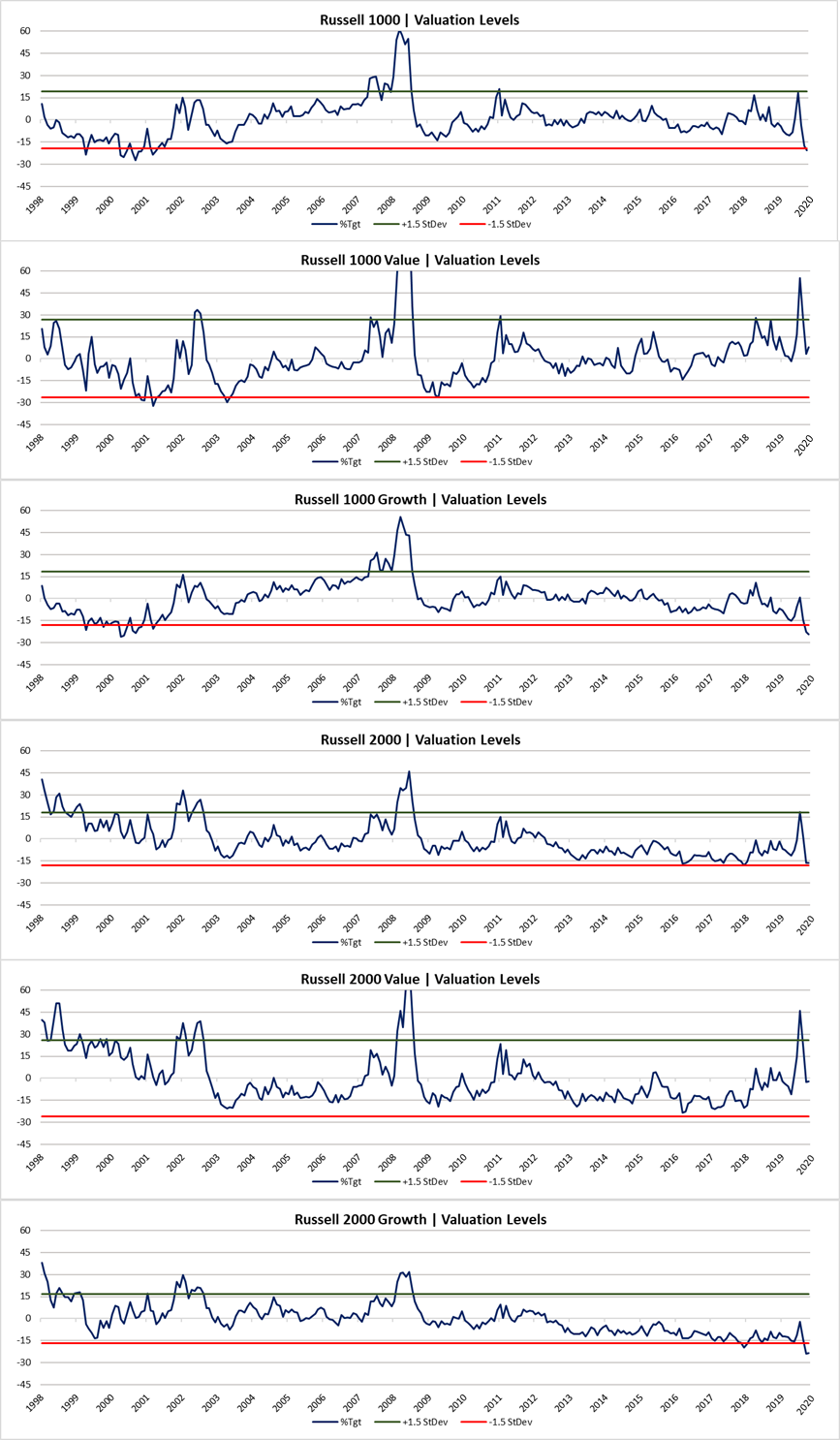 About Applied Finance 33 Articles
Applied Finance, a thought leader in valuation and portfolio construction, is a true “value” investment management company.  Unlike the majority of firms today that focus on low multiples to define “value”, we define value as identifying companies trading below their intrinsic value.  Our Valuation Driven™ approach forms the foundation of our investment decisions...more
Website Twitter LinkedIn